Root cause analysis (RCA) is a systematic process for identifying “root causes” of problems or events. The root cause of a problem is the main cause or driver of that problem. An RCA is based on the idea that effective and efficient management requires preventing problems rather than solving them in an ad-hoc manner once they arise and acknowledges that sustainable solutions depend on improving underlying conditions.

Understanding the layers and determinants that contribute to priority challenges

The example from Kenya below shows the process of understanding the layers and determinants that contribute to priority challenges. 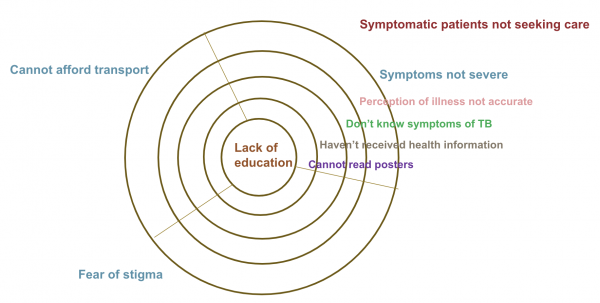 A causal factor is one that affects the outcome of an event, but it is not the root cause, i.e. the problem cannot be resolved by just removing this one issue. Although removing a causal factor can benefit an outcome, it does not prevent its recurrence with certainty.

Based on the values assigned to the identified problems and findings from the problem prioritization session and discussions, the root causes for each problem identified should be undertaken in sub-groups. Given the complexities of most of these problems and the many contributing factors (e.g. culture, health-system structure and processes, geographic context, etc.) these groups benefit from a rich mix of contributors from all relevant sectors and backgrounds (e.g. service providers both public and private, service users, policy- and decision-makers, community organisations, etc.)

Problems should have been identified on the basis of consolidated data, expert opinion, and personal experience (see Step 3: Problem Prioritisation) These sources can be reviewed again if necessary, noting any further gaps in evidence that are identified.

At this point it might be helpful to define some guiding questions around the prioritised problems to facilitate the group work. This is again best structured along the care continuum.

Consider the following in the discussions:

In consultation with participants, sub-group chairs should select a tool or framework to use for identifying root causes. There are different tools available to determine the root causes of problems. The best-known methods are the Fishbone and 5 ‘Whys’ techniques. These are described below. The final step – irrespective of the technique used – is to group the results into thematic “intervention” areas.

Once root causes have been discussed and documented using the selected framework, rapporteurs for each sub-group can present the findings back to workshop participants. Findings from each sub-group should be collated by facilitators of the workshop, so that root causes common across focus areas can be highlighted in the feedback to participants at marked as a higher priority area to address (due to their impact on several problems).

This is a popular technique with a lot of free resources online and the preferred option chosen by most of the early adopter countries. We have included some of these in the resources section.

Step 1: The fishbone technique starts with defining a problem or issue (“Problem Statement”).

Step 2: The team will then construct the skeleton of a fishbone, and put the following categories on each of the six lines coming out of the “spine”: policy, people, equipment, methods, data, and finance. [Note: countries can decide to replace any of these with more locally appropriate themes, if required]

Step 3: The next step is to conduct a 5-minute brainstorm for each of the categories just listed. You can ask “How could this category have caused the problem to occur? These responses can then be added to the diagram.

Step 4: Discuss in the group and determine a few root causes to be further investigated (in more detail).

This technique lets you ask “why did this happen?” five times. This is a way to get to the root cause of the problem for which an intervention can be designed so that the problem will not occur again.

Rate each cause by the likelihood that it led to this problem:

Move forward with only the top-rated cause, and identify possible reasons for its occurrence (i.e., ask the second “why”). Follow the same process as above for the subsequent “whys” until you’ve reached the root cause of the problem.

Add A Knowledge Base Question !

Add A Knowledge Base Question !